Interpreting a source requires you to demonstrate that you understand the overall message of a source. This requires you to think a bit more about what a source says than is required for simple comprehension. However, interpretation allows you to draw a more confident conclusion when you evaluate a source, particularly in regards to its relevance to your topic.

Interpretation is the ability to identify implicit (‘hidden’ or less obvious) meanings in historical sources.

You will need to do this most often with visual sources that take time to interpret. However, some written sources will often not be explicit enough for you and they will require your interpretation of the information.

Watch a video explanation on the History Skills YouTube channel:

How do I interpret a written source?

To successfully interpret what a written source says, follow these steps:

Here is an example interpretation of a source that follows the steps above.

(You can click on the image to make it larger). 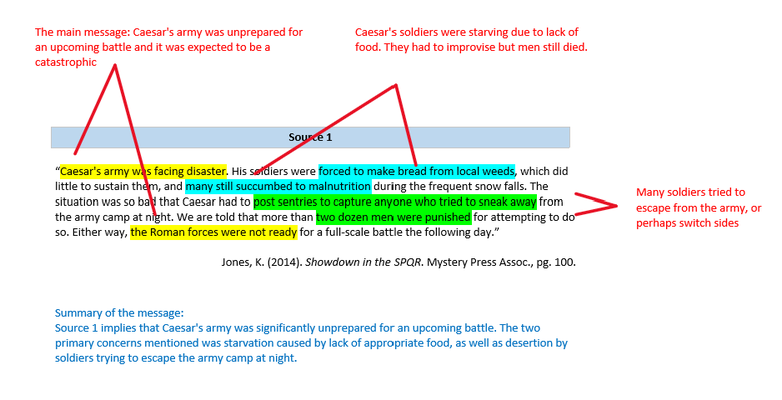 What do I do with my interpretation?

Identifying the message of a document shows that you understand the source, which means that you can use it as an indirect quote in your historical writing.

Your interpretation also helps you in your analysis and evaluation of the source. For example, identifying the source's message can help you ascertain:

Demonstrating the interpretation of a written source in your writing:

Davis makes the point that all the major political changes in Israel in the second half of the twentieth century are the direct result of American interference (1998, 56).

The Edwin Smith Papyrus provides explanations about Egyptian treatments for medical trauma and it shows that they were very much aware of the existence of all the major organs in the human body.

What do you need help with?